Whiteness, Brightness and Shade of Paper

The way in which we describe paper has evolved from a technical environment and there has been little effort to explain things in lay terms to the end user of these products. So here we are going to be taking a look at the differences between whiteness and brightness of paper and to try to explain things in a way most people will understand.

Many people get confused by the difference between whiteness and brightness and often think that they are one and the same. However, in truth they are very different and we are going to explain the differences here. So what do they mean?

Whiteness
Whiteness is a measurement of light reflectance across all wavelengths of light comprising the full visible spectrum. 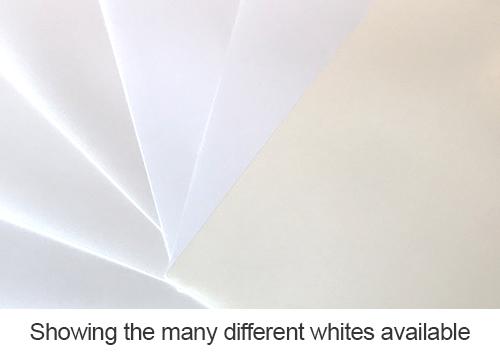 For a perfect reflecting, non-fluorescent white paper, the CIE would be 100.

The light in which paper is viewed under can make a big difference in the way that whiteness is perceived, which is why standard measurements of whiteness are done under a standard of light. Whiteness is sometimes achieved by adding Optical Brightening Agents (OBA). These OBAs can alter the way whiteness performs under different lighting conditions. For example, if the paper is a white base sheet with no OBA, it may compare well indoors but look duller outdoors when compared to sheets with added OBA. ?It is always a wise decision to compare different paper samples under different lighting conditions to see how they perform.

Brightness is measured on a scale of zero to 100 of the amount of light reflected from the surface of a paper; the higher the figure, the higher the reflectiveness of the paper.? Brightness is the reflectance of only the blue light channel with an exact wavelength and completely ignores other colour wavelengths, which in essence ignores the shade of a paper.??Think of brightness like a light bulb. When you use a 40-watt bulb, the room is somewhat dimmer and you can?t see details in the room clearly. However, if you put in a 100-watt bulb, the room is much brighter and you can see more clearly, with colours becoming more vibrant and shadows having more contrast. The same happens to an image when it is printed on papers with different brightness levels. You would expect that the brightness measurement would be sufficient to differentiate two paper products, but unfortunately it does not.

This is a phenomenon in which when you view different paper samples and they look very similar to each other under a particular lighting condition, but when moved to a different light source they then look entirely different from each other. These samples will then be considered a metameric pair.

Often metamerism is caused by differences in OBA levels and also the choice of dyes or pigments used to achieve the final shade. This phenomena is something to keep in mind when selecting different papers to go side by side in a project- as there may be a chance of selecting a metameric pair, and when displayed could look entirely different from each other.

Shade refers to the colour of the paper and doesnot take into account any reflected light. There are three main groups of white shades ? True White, Blue White and Cream White.

The blue white shade is often used for paper, because it appears whiter than a true white. Often blue white papers are called ?Bright White?, ?High White? or ?Ultra White?. It has this blue tint because it actually reflects more blues.

Cream white has a yellowish look about it. Instead of reflecting the blue light like a blue like does, a cream white actually absorbs the blues.

True white reflects the entire colour spectrum equally, which of course is the true definition of white and means it carries no colour bias.

When Whiteness and Brightness go off the chart

If you have looked at the spec sheets of paper before, you may have noticed some of the index figures going over the range of 0 ? 100. This limit is for standard paper made only with pulp. However, OBAs may be added to make the paper appear even brighter still. These OBAs reflect ultraviolet light as visible light, and therefore reflect more visible light than the actual light source emits, resulting in a measurement in excess of 100. In a similar fashion fluorescent OBAs will cause whiteness values to increase above 100.

If you are buying papers for monochrome printing ? you can choose paper by either whiteness or brightness. The decision to purchase paper should be driven by your personal preference for the contrast that is created between the black ink and the white paper. However, if you are buying paper for printing colour, make sure you take both shade and whiteness into consideration. The interaction between the ink used and the paper chosen will affect how the end result looks, as we have discussed throughout this post.